By Tshering
The government and the World Bank on Friday signed a USD 8 million (M) Global Agriculture Food Security Program (GAFSP) grant that will help increase agricultural productivity and enhance access to markets for farmers in selected gewogs in Southwest Bhutan.
The World Bank will be the supervising entity while the United Nations Food and Agriculture Organisation (FAO) will provide technical assistance for the project.
This project will be implemented in Bhutan’s five south-western dzongkhags of Chukha, Dagana, Haa, Samtse and Sarpang. By focusing on the dzongkhags in the southwest, the project represents an opportunity to significantly reduce pockets of extreme poverty in Bhutan and build the capacity of smallholder farmers to move from subsistence farming to commercial market-driven agriculture. The project will benefit around 10,400 households and 3,000 students in the next five years, according to a press release from the agriculture ministry. The project will also support irrigation projects in Bhutan.
Bhutan has made impressive progress in poverty reduction and economic growth in the past decade driven by accelerating commercialisation of agriculture, rapid development of rural infrastructure, and recent hydro-electric projects. Despite this growth, the agriculture trade deficit has been increasing and farmers still lack adequate access to markets.
Recognising the importance of the food and agriculture sector to the national economy, the government has assigned significant priority to agricultural development in its 11th Five Year Plan (2013-2018). Agriculture employs the majority of the rural poor, providing livelihoods to 58 percent of the total population, and has the potential to ensure greater inclusiveness of growth, while reducing the country’s food import bill and combating malnutrition affecting children (less than five years of age) countrywide.
World Bank’s Resident Representative for Bhutan, Yoichiro Ishihara said that through this grant they will be able to support the Bhutan’s strategic plan of improving food security and agriculture productivity. The growth and expansion of the agriculture sector will play a key role in Bhutan’s economic development and deficit reduction.
The GAFSP funded Food Security and Agricultural Productivity Project (FSAPP) will be implemented over five years (2017-2022) and will support Bhutan’s efforts to reduce rural poverty, food insecurity, and malnutrition. The project seeks to address multiple problems faced by farmers and rural households through a set of integrated, consolidated, and area-specific interventions responding to local constraint and opportunities.
Specific interventions include strengthening farmers’ groups and building their technical and business capacities; increasing the productivity of food and high-value crops through water use efficiency and improved agri-inputs and technologies, and enhancing access to markets for farmers through post-harvest and market infrastructure support and linkages to domestic and export markets.
The agriculture sector is seen as one of the ‘five jewels’ of Bhutan and the lives of so many Bhutanese depend on it. The Food Security and Agriculture Productivity Project will support the Royal Government’s goal of moving from subsistence farming to the commercialisation of agriculture through value chain development said Agriculture Minister Yeshey Dorji.
This new project will further enhance Bhutan’s agriculture production which has steadily been increasing after years of decline.
The GAFSP financed FSAPP grant builds on past World Bank projects supporting the agriculture sector and rural development in Bhutan. A productive and market-driven agriculture sector has the potential to play a significant role in meeting food and nutrition security, poverty reduction through higher rural incomes, and equitable and sustainable economic development goals. The signing was done in presence of Agriculture Minister, Finance Minister and World Bank Resident Representative, FAO Bhutan Resident Representative and officials from World Bank. 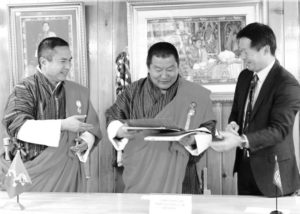