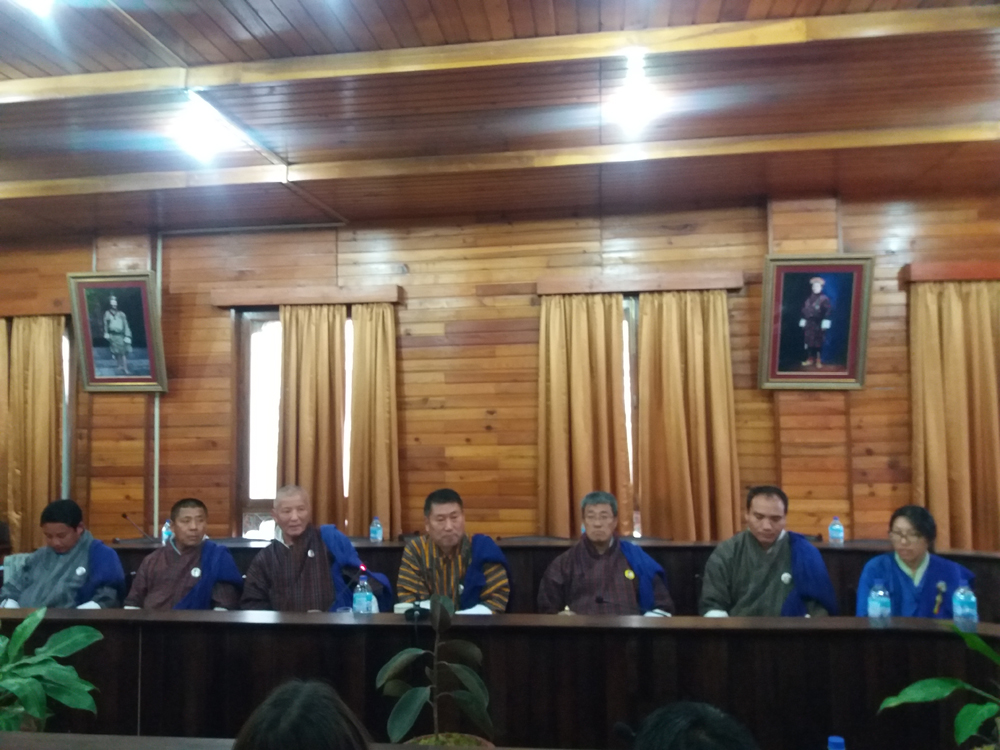 “We are shocked with such undignified and unthinkable acts and tactics of the Government to divert attention away from its own failures and trying to harm the Opposition Party by assassinating the character of a senior member,” the Opposition Leader (OL) said during the press conference on Wednesday in Thimphu.
“Such a vicious attack is most reminiscent of witch-hunting especially just before the upcoming elections.”
The OL said that the Government’s allegation of conflict of interest and official misconduct against the former Works and Human Settlements Minister Yeshey Zimba is baseless and malicious political vendetta and hold the Prime minister accountable for character assassination of a senior member of the party.
The government alleged the Fiscal Incentives (FI) approved by the then DPT Government in April 2013 has benefited Hotel Le Meridien with Nu 76.88 million, which belongs to the daughter of Yeshey Zimba, who chaired the 156th Cabinet session that approved the fiscal incentives to tourist standard hotels.
The government also alleged Yeshey Zimba of committing policy corruption and engaged in conflict of interest and official misconduct. He said that by leveling charges of policy corruption against one of the most respected and senior former minister, who has rendered over forty years of honest, dedicated service to the nation, is most disgusting and speaks volumes about the kind of leadership we have.
“It is utterly shocking that the government could make such wild allegations against a very senior and respected member of the former government and who is on the verge of retirement.”
The FI was granted to benefit all tourist standard hotels and 92 hotels including Hotel Riverside belonging to the brother of the present Finance Minister Namgay Dorji have benefited from the incentives.
According to the OL, the exemption amount availed by Le Meridien was the highest simply on account of the very high cost of its investment as a five-star hotel and not based on any other consideration. All hotels eligible for exemption differ in standards and level of investment and therefore are bound to differ in amounts of exemption.
“While implementing the Fiscal Incentives 2010, anomalies were observed that made the ground implementation difficult. In order to clarify these anomalies, the concerned agencies undertook extensive discussions and consultations following which a multi-sectoral committee consisting of Ministry of Finance, Ministry of Economic Affairs, Tourism Council of Bhutan, and Hotels Association of Bhutan was formed to review and submit a specific list of items that fall under a particular category of exemption with respect to the hotel industry,” the press release from the Opposition Party stated.
“Due to the time taken in the process of preparing and submission of the recommendations, the Cabinet could only approve the detailed list of eligible items in April 2013 only. Therefore, the Cabinet did not approve “additional incentives” as the government has falsely charged but had merely clarified the anomalies,” the press release stated.
The press release also stated that the Royal Government had been granting customs duty and sales tax exemption on imports for all industries and tourist class hotel since the 1980s. Therefore, the FI 2010 was nothing more than a repetition of the earlier tax exemptions. Its importance was basically to show that the elected government was fully committed to the growth of economy through private sector development.
The government has tried to dramatize and sensationalize the situation by mentioning a high figure of Nu.76.88 million as the additional benefits to Le Meridian. Firstly the tax exemptions appear high on account of the very high investment (cost) made for the Five Star hotel –it shows huge expenditure on imports of quality inputs to promote “high value, low impact” tourism. Moreover, the incentives do not come by way of cash grants from the government and are just notional revenue forgone to promote tourism. The investment would not be there if customs duty and sales tax on essential imports are not exempted. In turn, the revenue that has been generated through the hotel and tourism industry would not be there, had there been no investment. These exemptions are quite normal worldwide when investments are being promoted to keep the project costs low and improve viability.
The government has conveniently not mentioned the benefits that Hotel Le Meridien had brought to the economy in terms of high quality tourism particularly the employment and training of large numbers of educated youth (over 120 directly employed full time in the hotel). Many young Bhutanese were trained and engaged in highly skilled works which was appreciated even by the government itself. The spillover benefits include development of capacity of national companies to construct and manage such high-class hotels for the first time. The companies/personnel that gained experience from construction and management of the Le Meridien are today working on several prestigious hotel constructions. Many have got good jobs in the hotel here and elsewhere. Hence the tax incentives have paid off and benefitted the economy in return, the press release added.
The opposition members also pointed out “As a leader, the Prime Minister should think of uniting people, not dividing them based on narrow political agenda. If this turns out to be a game of Ping-Pong between the government and the opposition, it carries the risk of further creating misunderstanding and disharmony in our small society, thus affecting national peace and stability.”
The Opposition members said that they are deeply disappointed by the government’s intention to discredit the Opposition Party and the very personal attack on one of its senior-most and most respected member. The Opposition Party never imagined that the government would stoop so low as to engage in such unfounded allegations and disturb the peace of the nation, setting a very dangerous trend for future governments to follow and to ruin a young democracy, the gift of our Monarchs.
Further, the Lamgong Wangchang MP said that this kind of allegation will discourage foreign investors to further invest in our country.