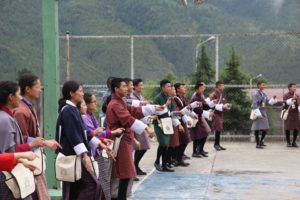 A total of 80 youth, 40 male and 40 female along with eight escort teachers from 20 dzongkhags are in the capital Thfor the 10th Golden Youth Award Camp.
Organised by the Bhutan Youth Development Fund (YDF), the weeklong Golden Youth Award camp started from July 5.
The participants are the representatives from 20 dzongkhags who will be competing for the Golden Youth Award title. The Bhutan Youth Development Fund will be providing scholarship to the Golden Youth title holder (1st position holder).
The selection for the award is done at dzongkhag and national levels. At the dzongkhag level, four students are chosen among the nominees from schools. Four students each from 20 dzongkhags then compete at national level for the title of golden youth.
During the opening day, Program coordinator of YDF, Roma Pradhan said the program will give participants the freedom to explore their best in leadership training, activities and a platform to exchange ideas for the lives of both rural and urban young people.
She also added all the participants will be assessed in the fields of academic excellence, literary, general knowledge and IQ, talent, games and sports and social service equally.
Younten Jamtsho from Gelephu Higher Seconday School said every participant in the camp came with a dream for the prestigious title and all know it’s not a easy. “We have to give our 200 percent in all the category,” he said.
Sangita Maya from Samtse Yoeseltse MSS said she didn’t have any thoughts of winning but do her best and hope for the best.
Choki Jamtsho from Ramjar Middle Secondary School, Trashiyangtse said the competition is tough. Dechen Tshomo of Damphu Central School said it’s a clash of the best among the individual dzongkhag and naturally the standard in each category will have to perform the best.
This year is the 10th year that YDF is organizing the Golden Youth Award. YDF has provided six scholarships to the winners till now.
Every year the camp is organized during the summer vacation in the capital for a week. This award is founded to honor the love that our monarchs have for our youth. This award is also to remind our youth of the important role that they play in the development of our country.
Every year, one student from class X is awarded the title of the ‘Golden Youth of the Year’ after a series of local and national competitions and is later awarded the scholarship programme. The first Golden Youth Award Camp was held in 2008.
The program began with the formation of group leaders and briefed on setting community standard and later in the afternoon during financial literacy session, Bank of Bhutan (BoB) initiated an opening of Nu 300 of saving bank account for the students.
In the awareness session, Royal Monetary Audit (RMA) briefed participants on the learning to earn, becoming a savvy saver, a smart spender and managing personal budget and BoB briefed on flexi recurring, benefits of opening a bank account, digital finance and education loan.