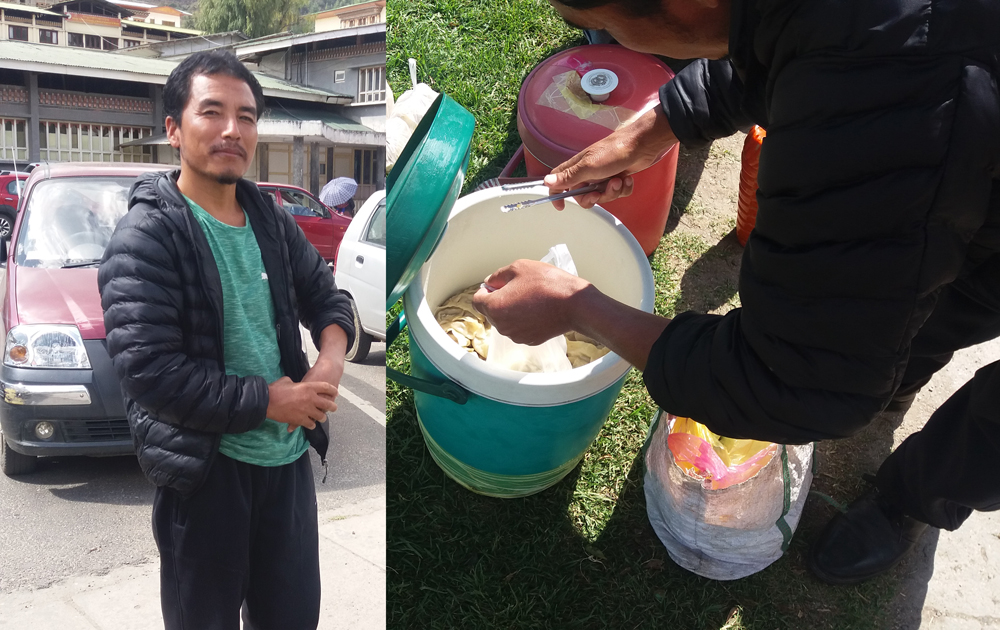 For few life may be fun, for some life might be joy but for many life is a struggle for survival.
If not for small business they do, it seems life has no place for them in this world.
It is 6 in the morning and Durga and his wife is already up and busy making momo. By 10 o’clock they finish making 500 pieces of momo, about 100 plates. He carefully put it in two large hot cases along with a bottle of spicy sauce and sets off for the day.
Durga daily carries the thermal cases on his soldier all the way from Chamzamthog to hospital area and settles just few meters away from the steps leading to the old hospital entrance.
It is there he makes his living. He has been selling momo for last six years.
“Momo zhey, momo momo” is the most common words Durga yells to draw attention of the people nearby.
“It is hard at times, but with my earnings I can pay my rent, household expenses and expenditure for my daughters. Overall, me and my family can make a decent living,” Durga said.
Durga Galley, 37, from Samtse moved to Thimphu in hope of better opportunities. Prior to becoming a street vendor, he worked at a construction site for nine years. His wife being unemployed and needing to raise two daughters, selling momo has been his only source of income for last six years.
Though he struggles, he finishes selling all his momos at the end of the day earning around Nu 3,2oo. With expenses cut aside, he roughly earns a net profit of Nu 1500 a day. His momos sells the most at noon.
However, there was a time when he was accused of depriving pedestrians of their space. Durga said that Hospital staffs do not allow him to sell near hospital as they said the area is prohibited for street vendors.
“Since the area is always crowded I try to targets such areas to sell my momo.”
But Durga was recently held inside the office for five hours.
“Once they let me out, it was too late to sell rest of my momos. There was more than half left. It was a huge loss.”
“The security guards chases us away from the hospital compound as they say we are making the compound dirty. We are frequently forced to go else where to sell our products.
The space legally available for street vendors keeps shrinking day by day.
Meanwhile, the competition from other restaurants and other vendors adds to his misery.
During weekends he sells momo near Centenary Farmer Market from 11 am to 5 pm. He sells both cheese and beef momo for Nu 30 and Nu 40 respectively.