Rats cause menace to mushroom farmers

Shitake is a good source of income for farmers in Gidawom 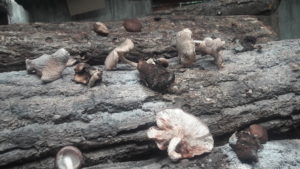 At Gidawom in Thimphu, farmer Thinley Zangmo is literally playing a cat and mouse game. With the rodents attacking her priced Shitake mushroom, the farmer is having sleepless nights.
Thinley Zam tries shooing away the rats with sticks and brooms but they keep coming back. The room is cleared of the menace every time she comes with the broom. But the within an hour the steady trickle becomes a stampede of brown fur and black beady eyes. They flow like a muddy river, not deviating from their course out of the hole.
She watches them until the mess became a trickle again. When they are gone all that is left behind is a about kilogram of spoiled mushroom.
Thinley Zam cultivated shiitake mushroom that thrives on the soiled logs. The room, where the logs are kept needs to be moist and airy. This is perfect for the rats to thrive and attack.
Shiitake mushroom has over the years become an important source of income for the people of Gidawom in Thimphu. The demand for the mushroom is growing but so is the challenge of cultivating it.
Of late, rats and other invasive species growth have become a threat to their prized mushrooms.
“Rats are a nuisance,” says Thinley Zangmo. “They are destroying about three kilograms of mushroom in one night.”
She had tried placing bowls of rice at every corner of the room where she grows to prevent the rats from attacking her mushrooms. “It has not helped,” she says. “I even tired leaving rat cakes but this, too, has failed to work.”
A kilogram of shitake fetches Nu 600. Farmers earns between Nu 4,000 and 5,000 every week and 1, 20,000 to 1, 40,000 annually through traditional farming. The mushroom, which is grown on watered oak tree log, can be harvested every three days. But this year, the rats ate into the income. “I could earn only about 50,000 this year,” says another farmer, Dema.
Almost all 25 households in the village grow the mushroom locally known as Sokay Shamu. While some of them started in 2008, others are new to it.