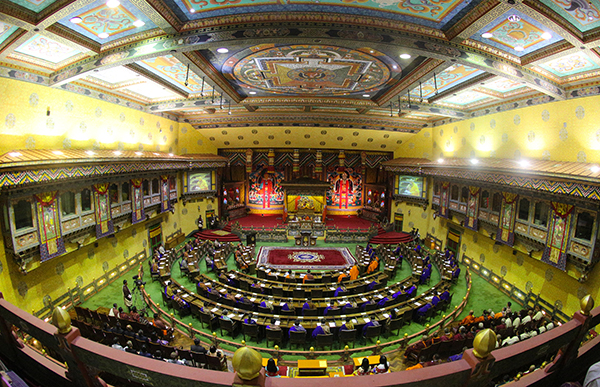 Bhutan’s national debt hits Nu 184 billion, an increase of Nu 83 billion from Nu 101 billion in 2013.
The Member from Panbang Constituency, Dorji Wangdi raised his concern and asked the government to clarify for the increase of the national debt, despite not having initiated a single major national project.
Lyonchoen Dasho Tshering Tobgay thanked the opposition for raising the issue, but said that the increase in the national debt stock was mostly on account of hydro projects, which currently stood at Nu 89 billion.
“Non-hydro debt is only Nu 44 billion. The increase is also on account of currency swap of USD 100 million availed by Royal Monetary Authority (RMA) for a period of six months,” Lyonchoen said.
Lyonchoen said that by the end of the 11FYP, the non-hydro debt stock is projected to decrease at least by 23 percent with the settlement of the currency swap by February 2018 and liquidation of the line credit of Nu 4 billion by March 2018 by RMA besides other repayments.
He said that apart from Hydropower projects, expansion of East-West Highway, introduction of helicopter services, construction of gewog center roads were all part of national projects.
He also added that considering the need to control national debt, the Public Debt Policy was adopted in 2016 to ensure that public debt is being repaid on time with minimum risk and cost.
Similarly, the Opposition Leader, Dr. Pema Gyamtsho raised concern over Kholongchhu Hydroelectric Project. He said that though the government had earlier informed the Parliament that Kholongchhu Hydroelectric Project had been started, it was recently revealed that even the concession agreement has not been finalized and as such no major construction works have been awarded so far.
“This showed that the present government has not been able to start a single mega hydropower project during its term,” the Opposition Leader said.
However, Lyonchoen said that the 600MW Kholongchu Project is the first among the four Joint Venture (JV) projects that the government had agreed to undertake under the JV mode with the Government of India (GoI) under a common Inter-Governmental Framework Agreement.
The Inter-Governmental Agreement (IGA) for JV projects was signed in April 2014 and finalized in June 2015.
Lyonchoen informed the house that Nu 1,550 million have been incurred till date on various pre-construction works completed and those in progress with respect to the implementation of the projects started since September 2015.
“With regard to the Concession Agreement (CA), it is at an advanced stage of finalization. The negotiations were delayed because it was against our hydropower development policy. Meanwhile, the government is reviewing through a high level committee to come out with a clear way forward as to the implementation of other projects under the 10,000 MW development plan,” Lyonchoen said.
Lyonchoen also informed the house on the implementation status of the Punatsangchhu-I Project, Punatsangchhu-II Project and the Mangdechhu Project. He said it is 83.21 percent, 72.36 percent and 89.3 percent completed respectively.
He also informed that a team of experts from Bhutan, India and Norway studied the problems faced in the Punatsangchu I and II.