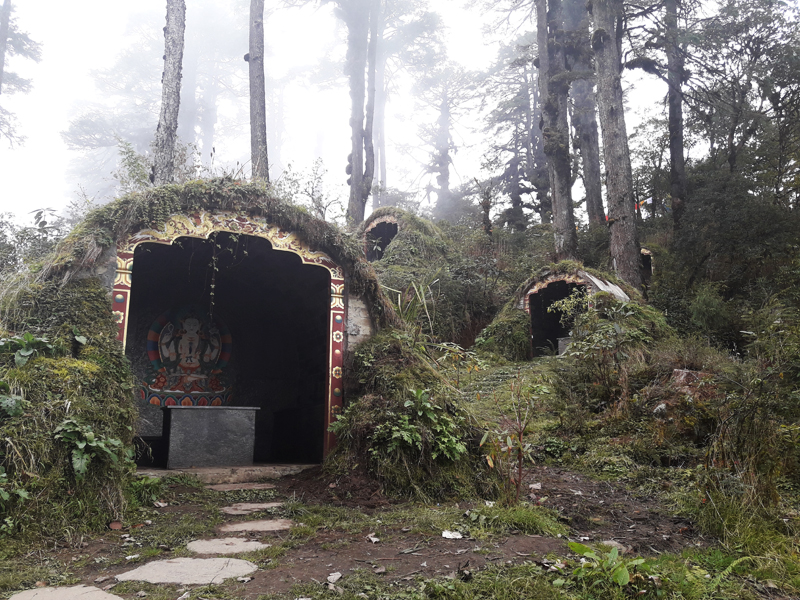 Dochula is known for its breathtaking panoramic view and its majestic 108 chortens gracing the pass. Located between Thimphu and Punakha, the pass is a popular spiritual destination for both locals and tourists.
To farther add to its beauty, a hidden surprise awaits the few who take the time to venture away from the touristy hub.
These curious visitors will discover several small sanctuaries that resemble Hobbit homes at a first glance tucked into the hills just above the pass.
Built to commemorate the 60th Birth Anniversary of His Majesty the Fourth Druk Gyelpo, the 11 man made caves with 11 different paintings of god and goddess symbolizes the Birth Date of His Majesty The King, November 11. It is also constructed in the hope of benefiting both locals and outsiders.
“The caves will benefit those who seek for inner peace after a long week, months or years of tussle with the worldly matters,” said Lama Nima Tshering, Dhochula lhakhang.
“People coming here may not be able to meditate for days, but a few minutes or an hour of meditation in these caves will help and make them feel calm and relax.”
“I can see visitors leaving happily after meditating for a short period. Though their happiness may be temporary, it gives me immense satisfaction that they are at least happy for a moment, in this place. Thinking so, my respect for Her Majesty the Queen Mother Ashi Dorji Wangmo Wangchuck grows even deeper,” Lama Nima added.
It is Her Majesty’s extraordinary vision and her deep realization of the benefits people will draw that made the construction possible.
Apart from 11 caves, there are other wonderful structures beautifully built and perfectly crafted in a shape of 60, which signifies the 60th birth anniversary and 34 stone made bench that signifies number of years under His Majesty’s reign.
The construction commenced in 2015 in a 7 acres land and was completed in 2017. It was inaugurated on June 2 by Her Majesty the Queen Mother, Ashi Dorji Wangmo Wangchuck and Dasho Truelku Varotsana Jigten Wangchuck, the son of Ashi Sonam Dechan Wangchuck.
Last year ambassador of Bangladesh, Chairperson and Deputy Chairperson of the National Council visited the caves to meditate.
Meditation is a practice where an individual operates or trains the mind or induces a mode of consciousness, either to realize some benefit or for the mind to simply acknowledge its content without becoming identified with that content, or as an end in it.
People believes that meditation helps in leading better life with that come better health. Meditation refers to meditative practices of Buddhist philosophy. Meditation was practiced and preserved since ancient days.
Buddhist pursues meditation as path towards enlightenment and nirvana. Buddhist meditation techniques have become increasingly popular in the wider world, with many non-Buddhists taking them up for a variety of reasons. Meditation enhances to develop ones mind, concentration and many other keys of making life successful.