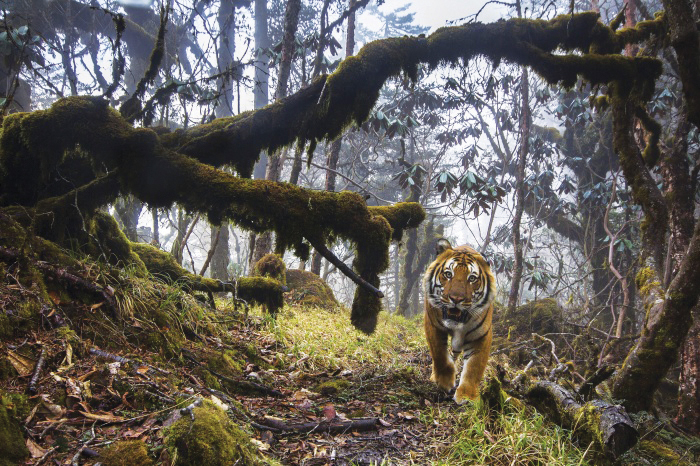 In what is a feather in the cap of Bhutan’s environment conservation effort, a high-resolution picture of a Bengal Tiger was captured at an altitude of 11,733 feet in Bhutan
Bhutan’s national tiger survey in 2014-2015 confirmed the presence of tigers in several areas of Bhutan for the first time – and found that tigers were using wildlife corridors to move between parks.
Photojournalist Emmanuel Rondeau and three Bhutanese park officials from the forest and park service department captured the images using eight camera traps and took eight weeks for the mission that began in March this year, a press release from the agriculture ministry stated.
There are officially 103 estimated tigers roaming freely in Bhutan. The estimated range of credible tiger number in the country is within 84 to 124. From 75 tigers estimated in 1998, the tiger population has increased to 103 in 2015. This is 37% increase in last 17 years, which is almost more than one tiger every year.
Agriculture minister Yeshey Dorji said that this calls for scientific management of the biological corridors connecting the protected areas in order to ensure effective conservation of tigers and their meta-populations in Bhutan. Although biological corridors are part of the protected areas, there has not been comprehensive assessments and studies being conducted such as those in the protected areas. “This information through high resolution camera traps would provide Bhutan with a solid basis to start such studies and develop management plans,” he said.
The particular corridor was selected for the mission because the area is under pressure from a wide range of human activities and form a critical link for tiger movement from Royal Manas National Park to other northern parks through Jigme Singye Wangchuck National Park. With support from WWF Bhutan, park officials have also recorded many species of wild Asian cats in the region.
Biological Corridors were first established in Bhutan in 1999 and bestowed as a Gift to the Earth from the people of Bhutan. There were initially 12 corridors with a total coverage of 3,660 km 2 connecting all nine of Bhutan’s protected areas. However, with the establishment of Wangchuck Centennial National Park in 2008, three corridors were subsumed.
Meanwhile, Global Tiger Day was observed yesterday at the Royal Takin Preserve, Motithang. The event includes the formal inaugural of the Preserve office including open viewing deck and a pamphlet inviting membership on Friends of Bhutan Takin to support the Royal Takin Preserve.
The event wasgraced by the Speaker of the National Assembly Tshogpon Jigme Zangpo and senior government officers. The event calls on the Bhutanese community to support tiger conservation given the tangible benefits it brings to human society by being the guardians of our forest ecosystem.