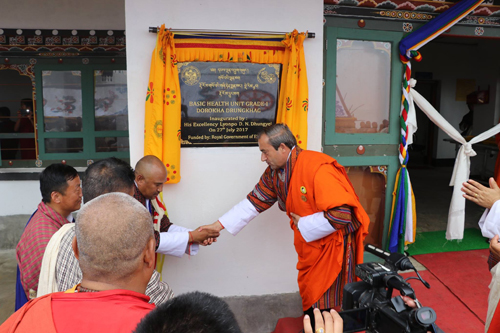 Hundreds of people gathered for the inaugurated of a Basic Health Unit (BHU) in Dorokha on Thursday.
The ceremony was graced by the Information and Communication Minister D N Dhungyel who inaugurated Dorokha BHU Grade-I along with the officials from dzongkhag and dungkhag. The BHU will benefit three gewogs (Dophuchen, Doongtoe and Denchukha).
Later in the afternoon, the minister also inaugurated Namgyal Dekyid zam. The bridge connects Denchukha gewog in Dorokha dungkhag and Samtse dzongkhag. It has been over five years since the works for the construction of the bridge commenced. The bridge collapsed last July claiming lives of eight workers. The bridge will connect about 600 households in Denchukha with other areas in the Dungkhag.
The inauguration started off with a traditional marchang ceremony with Hindu priests and Buddhist monks chanting prayers to avoid mishaps in future.
Both the BHU and the bailey suspension bridge over Amochu was built with government fund.
On Monday, the minister also graced the groundbreaking ceremony of Bukey ‘A’ farm road, a 3- kilometer road with Gewog Development Fund. The were road will benefit around 30 households of Bukey ‘A’ and Malbasey chiwogs.
Lyonpo D N Dhungyel also graced the Salang Tendrel (ground breaking ceremony) for the construction of a Bailey bridge at Sukrutey Khola. The bridge is expected to benefit more than 200 households. It will be completed by February 2018.