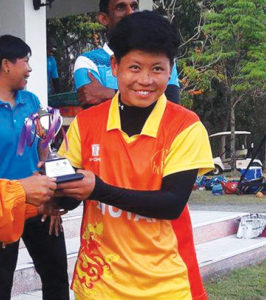 Dechen Wangmo, a-24-year-old from Yoeseltshe, Samtse is a cricketer and a goalie. She started playing cricket in 2007. She is a National Cricket team captain and the first Bhutanese woman to score a half century in an international tournament. She is a all rounder and played matches in Kuwait, Thailand, Malaysia, Singapore and India. She is currently playing as a goalie for Terton FC and a first Bhutanese woman to play in both the leagues (cricket and football).